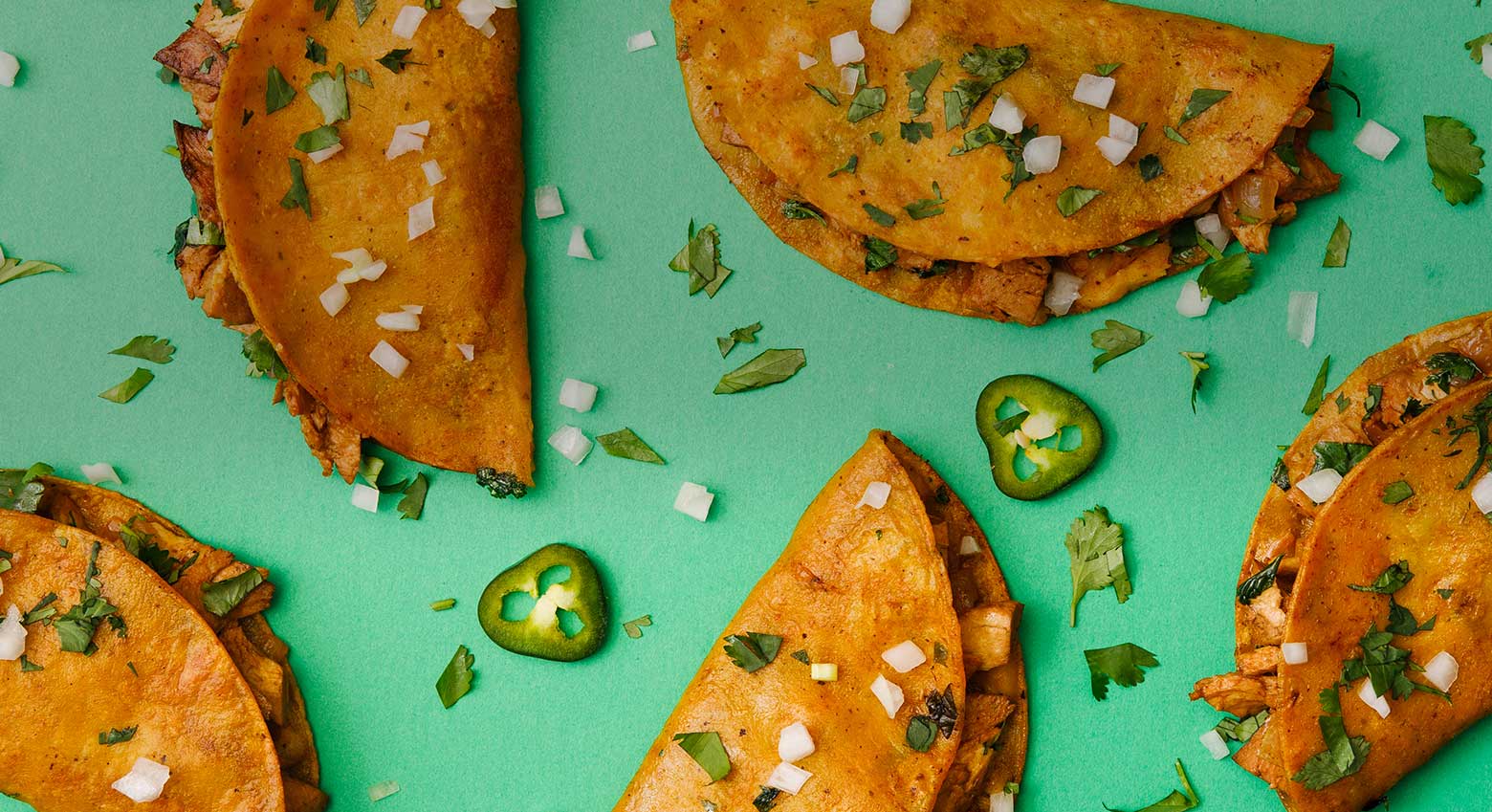 For these uber-flavorful birria-inspired tacos, we marinated Tofurky Lightly Seasoned Chick’n in a flavorful sauce made from guajillo, ancho, and chipotle peppers, onion, cinnamon, and cloves. Then we added veg broth and simmered the whole business for a bit. We dipped corn tortillas in the broth, filled them with the Chick’n, then pan fried them. Served with green onion, cilantro, extra broth for dipping, and taqueria pickled vegetables, these tacos were so full of flavor it was hard to stop eating them.

1. Remove seeds and stems from dried chiles. Place chilis in a pot with onion, tomatoes,
and bay leaf. Pour 2 cups of broth over the mixture. Bring to a boil, then lower heat and
simmer, uncovered, until onions are soft, about 12-15 minutes. Remove from heat, cool
for 5 minutes and discard bay leaf.

2. Using a ladle, transfer chile mixture and liquid along with remaining cup of broth to a
blender and process until smooth.

3. In a microwave, warm tortillas (4 at a time) for 30 seconds. Dip each warmed tortilla in
birria sauce, fill with Lightly Seasoned Chick’n and a sprinkle of onion. Fold taco closed,
set aside and assemble remaining tacos.

4. In a large skillet over medium-high heat, warm oil. Once oil begins to shimmer, add 3-4
tacos to the pan, leaving at least ¼” of space between for even frying.

5. Fry 2-3 minutes on each side until golden brown and crispy. Transfer to a paper towel
lined plate and fry remaining tacos.

6. Place fried tacos on a serving

Manage Cookie Consent
This site uses cookies. Cookies allow you to enjoy certain features like our customized dealer locator or recommendations in our store. By using Tofurky.com you accept our use of cookies.
Manage options Manage services Manage vendors Read more about these purposes
View preferences
{title} {title} {title}

We'll email you every couple of weeks or so with tidbits from Tofurky Land: new products, gotta-try-it recipes, coupons, contests to win gift cards and swag -- fun stuff like that.